I’ve had six wisdom teeth removed (yes, SIX), I have four tattoos and I’ve experienced the hellish heat of a Dominican blowout, but nothing compares to the pain of having my eyebrows tattooed. I think the only pain that may be somewhat similar is a bikini wax or childbirth.

I have naturally thin, nearly invisible brows with no arch so I literally didn’t know how to draw them on or fill them in because I basically have a blank forehead. LOL (I can laugh at myself!) Regardless of how amazing the rest of my makeup looked without having brows to frame my face, I always felt like something was missing.

One day I came across an article on a popular blog about “eyebrow embroidery” and it was like pulling back the curtain on ‘The Wiz’. It was an “Aha moment!” I couldn’t believe some of these “perfect” brows weren’t “real” they were actually cosmetic tattoos!

So I recently underwent the semi-permanent procedure, “Microblading” where licensed technicians put ink on a scalpel (or tiny razor blade) and meticulously create small strokes that look incredibly like real eyebrow hairs. Through my experience, I learned that you get what you pay for…

Typically, the best reviewed technicians costs between $400-$600 and the way my freelance peanut butter and jelly lifestyle is set up, this procedure was clearly for the rich and famous that had money to blow. In continuing my research, I came across a well reviewed cosmetics school where the prices started at $600 for the owners/instructors but to have a student tech perform the procedure, which would be supervised by the instructors, the cost was only $150. Now I’ve definitely been in situations where being frugal went wrong…trying to save money in the Bahamas I got an Air BnB instead of a hotel and damn-near got kidnapped but that’s another story for another time.

I was definitely hesitant about paying a fraction of the cost for the service but I felt like I had read enough reviews and looked at all of their photos so I felt confident and beyond excited to move forward.

When I walked into the shop near Beverly Hills, it looked like a cross between an emergency room, a hair salon and a nail shop. There were about ten chairs on both sides of the room with women in white coats and face masks busily working on their customers’ faces. Now here’s where it gets interesting. The following are five things I learned during my first permanent makeup, microblading experience.

One of the most frequently asked questions about the procedure is the recovery time. You’re supposed to be able to get it done in about an hour and thirty minutes then then go on about your day. However, it’s much easier for the black or brown ink to show up on fair skin. My appointment was at 2:30, I arrived by 2:15 but similar to a doctor’s office, you have to fill out paperwork then they put a numbing cream on your forehead which has to sit for 20 minutes. I had the unfortunate experience of learning that the darker you are, the longer the process because it’s that much harder for the brow hairs to show up. Even with my dark skin, using black ink was never the first choice because I have honey blonde hair. Once the brow was outlined with a pencil, the tech began using a chocolate “espresso” color on my brows. It’s normal for your skin to bleed (remember they’re using a blade) However, I was bleeding so much that the blood was pushing out the ink so what should have been 2 hours became an extremely dramatic and complicated 4 hours.

At the cosmetology school in the midst of the microblading process where a blade with ink is used to repetitively create small lines that mimic brow hairs.

Despite being told that my school technician was just days away from completing the program, it seemed as if it were her first day when she began working on my face. My technician, lets call her “Lucy”, clearly hadn’t had previous experience of working with someone of my complexion. My forehead bled so intensely despite the numbing cream. In trying to manage the bleeding, she wiped off the outline that was supposed to be her guide so she basically started free styling on my face with the blade.  As I started crying and Lucy replied, “Beauty is pain.”

The instructor, “Ming” eventually took the blade from Lucy and started using me as a teaching tool in an attempt to fix her student’s botched work. There was another African American woman with sparse brows seated next to me and her student tech lets call her “Susan” claimed to have been doing brows for years, thus homegirl was in and out. The owner, “Melissa” and Ming both greeted me when I arrived. I wish I would have asked them to be placed with the student that had the most experience with African American skin as there were black students in the room. Maybe I still would have ended up with Lucy based on availability or maybe I could have avoided some pain if I had just asked more questions. 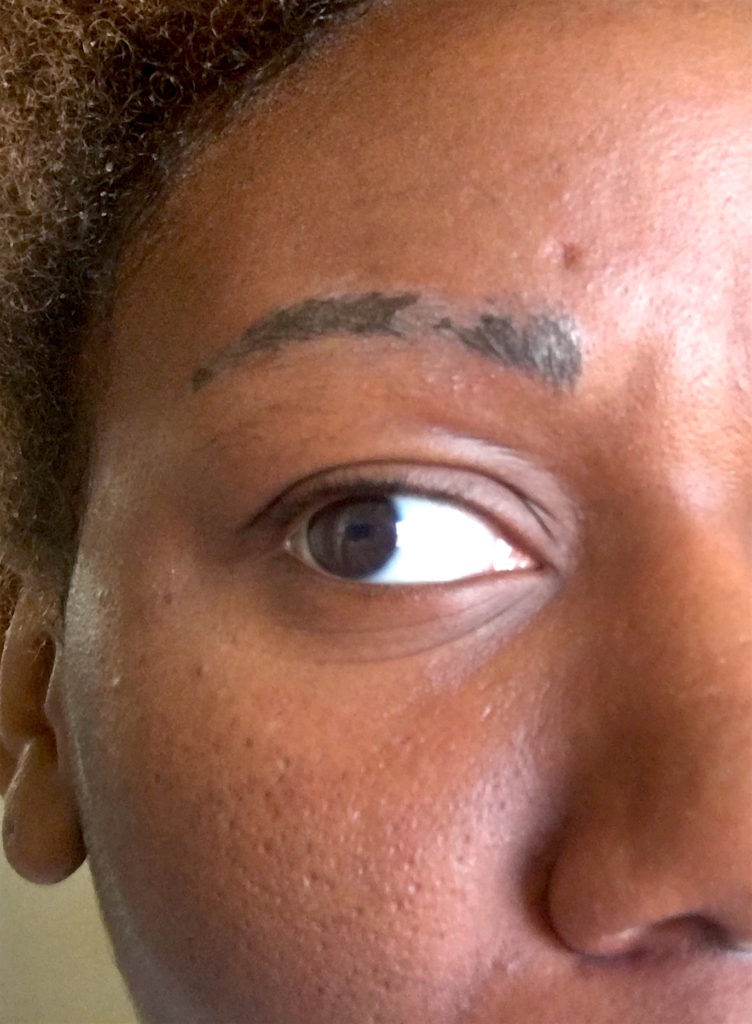 In both procedures extra ink was placed on top of my brows; I guess you can compare it to icing on a cake. As you wash your face, that access ink chips away like a scab.

Now that we’re going into the third hour of this process, “Melissa” had come over and tried to reassure me that this process is ‘art’ and it takes time. Despite her uncertainty, instructor Ming told Lucy to keep chopping away at my brow, “don’t worry, Melissa will fix it” she said. What Melissa would later explain to both Ming and Lucy was that despite me wanting a dark brown brow, the blood from my face wasn’t letting the brown ink be great so they needed to use black ink in order for the hair strokes to be visible. So Melissa grabbed the blade and went to work on my face at a ridiculously fast pace. I felt like she was chopping at my face like meat on a hibachi grill.

I had now felt the pain of being nicked for three hours by three people at various angles with different amounts of pressure. At this point my body was shaking uncontrollably. I was eventually given a blanket, I don’t remember any air conditioning being on so I was sweating like crazy but I was cold at the same time. I was already crying when Lucy was working but with each of Melissa’s sword like swipes, I started balling hysterically. We paused and I was given some water.

Melissa continued for a few more minutes before she said that she had to stop because my skin was getting too irritated. I sat up in the chair as blood dripped from my face. Melissa said that my oily skin made it harder for the ink to settle and that my blood must have been very thin. The school’s website says no caffeine prior to the procedure. I will admit that I had a small cup of coffee at 10am along with some fruit five hours before I got my brows done. I definitely didn’t think that was to blame for all of my pain but I would advise eating an iron enriched meal before the ‘operation’.

I was disappointed with the results from my first microblading experience. A week a later, I had a badly arched, barely noticeable brow!

This is supposed to be one of those “lunchtime procedures” like botox where you can get the injections and go back to work. However, I would advise you make an appointment for a 4-day weekend or a holiday so you have time to recover. Even if your results look great immediately, Aquafor (or Vaseline) is slathered on your face and you can’t get your brows wet or put on makeup for at least 24 hours. So get some ice cream and prepare to Netflix and chill.

Even though I had the procedure done on a Friday, the brows are so dark, they look like glistening Sharpie marks. And for the first 24 hours after the procedure, you can’t wash your face. Over time the brows will scab and the color will start to fade. Note, most shops provide a free touch up within four weeks of the initial procedure.

Look for a place that has client photos with a complexion akin to yours. Similar to not just trusting anybody to perm or weave your hair, if the place doesn’t have receipts of working with clients that look like you, you may end up with subpar results.

I found the shop that did my brows via Yelp. While I looked and their photos on their social media pages, in hindsight, I would have used social media hashtags i.e. #permanenttattoo #microblading etc. to book an independent tech with clients that look more like me.

Y’all I love my brows! But the healing process was intense and at times I was definitely regretful. It was only AFTER the touch up procedure did I embrace it. When it was time for the complimentary follow up appointment, I refused to let a student tech touch my face, I demanded that the owner fix my brows and this time she used a DIFFERENT method. 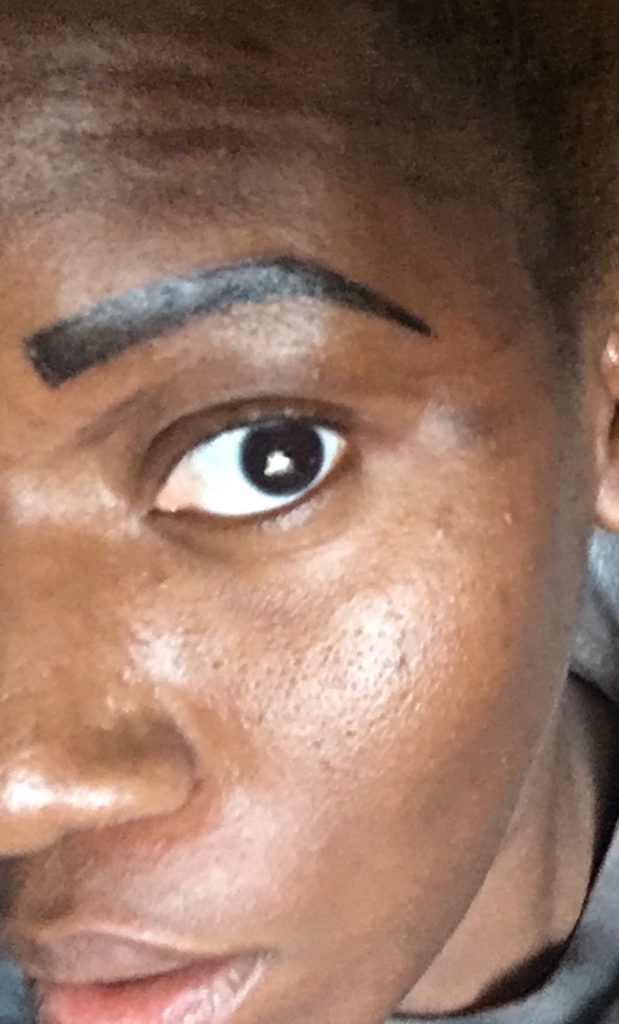 Looking like a Nike symbol immediately after my touchup. The ink faded over time. Instead of a blade, my brows were literally tattooed on.

It’s called “powder-brow” but I coined it the “Lebron hairline machine” because instead of using a blade, the owner used a tattoo needle (with ink that’s different from traditional tattoos) and she literally filled in my brows like I was a coloring book.

This time, the process took about an hour. On a scale of 1 to 10, the pain of doing the ink fill-in was about an ‘8’. In terms of the healing process, I kept Aquafor slathered on my forehead for about a week and  I had to constantly blot my face for about three days because of minor bleeding.

Initially the ink was very obvious and pronounced, I felt like I looked like I had two Nike checkmark logos on my forehead but now, nearly three months later, the ink has somewhat faded and it looks more natural.

After 25 years of waking up without brows, I’ve gotten used to the new additions and I love it! If you have sparse brows, I would recommend the procedure, just do your research! 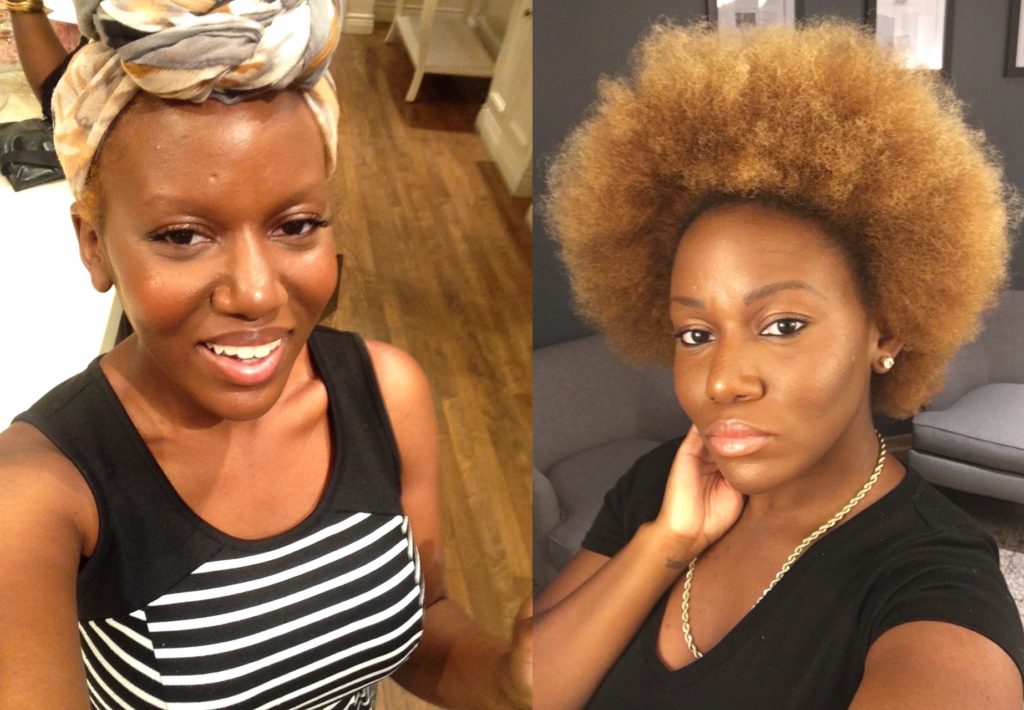 (Left) My naturally browless face.(Right) Three long months after my microblading and powder brow procedures, I’m satisfied with the results. It was a necessary investment.