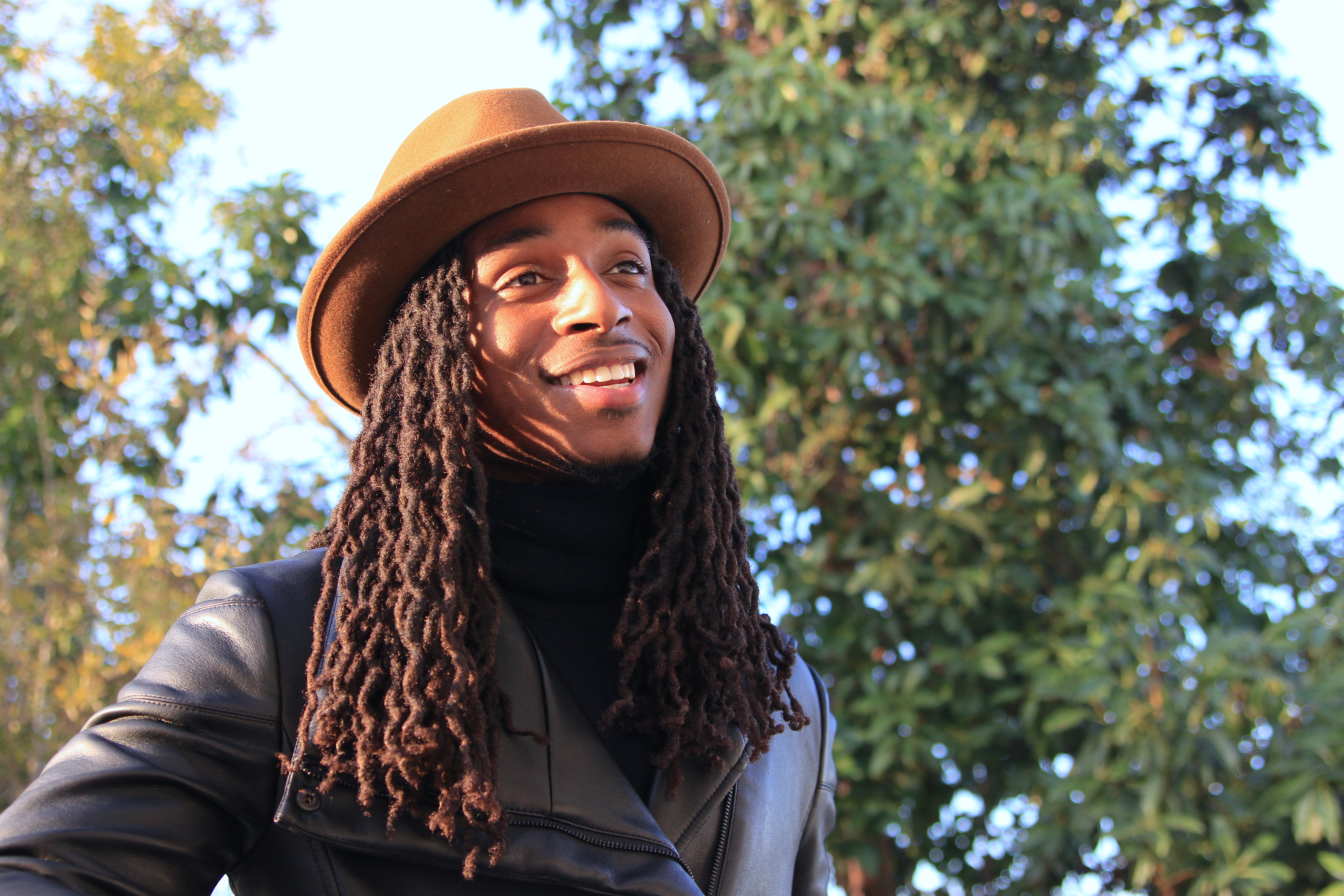 [edgtf_dropcaps type=”normal” color=”” background_color=””]I[/edgtf_dropcaps] met Egypt Ali in Miami en route to a screening of Dr. Dre and Jimmy Ivine’s documentary, “The Defiant Ones” during the American Black FIlm Festival (ABFF). Egypt and I had mutual friends but we had never met until this day. In a group with five of his friends, Egypt immediately stood out wearing slacks, a vest, a button up shirt and a hat in June when it was approximately 90 degrees, but he made it look cool. As our group walked down the promenade to the screening, the Philly native asked me if I thought he should cut off his locs before his upcoming move to LA. With an emphatic ‘no’ I shared how I thought his unique look would open more doors for him than a nondescript fade. When we went to exchange contact information, I followed up this compliment with, “Your business card is trash.” I was taken aback by the black and white card with a poorly cropped photo in the center and an illegible cursive font. It was the equivalent of the one star reviews you see Amazon because the actual product didn’t look like photo online. Egypt graciously replied to my criticism of his business card with, “Will you be my mentor?”

As this site was first taking shape, Egypt was one of the first people I thought to interview. Maybe it’s pride or maybe it’s just how some men are raised, but it’s not as common to hear men verbalize their emotions. I had never met a man that was willing to be so open about his insecurities.Society is preoccupied with “fixing” women’s “flaws”. Our hair, nails, makeup, weight, curves or lack there of, is an integral aspect of our being. Oftentimes women put their self-worth in the hands of men for validation not realizing that they’re also figuring themselves out. So conversations with Egypt were a breath of fresh air.

Despite racking up hundreds of “likes” on social media for his body and his babyface, I learned that his vulnerability is a part of what makes him attractive. Six months after our initial meeting, Egypt Ali is definitely making a name for himself in LA, starring in plays, working with brands and his latest accomplishment being a film feature role.

In his first interview, the Philly native and Lincoln University alum shares the defining moments of his childhood that paved the way for him to become the man he is today.

Zon D’Amour Was there a particular age or turning point in your life that impacted your self-confidence?
Egypt Ali: Growing up playing sports and being in the “in crowd”, I always felt attractive. But it was that superficial kind of attractive. I had an athletic build, I was popular in several counties because of sports, and I was pretty well dressed for the time. Oddly enough when I look at old photos, I wonder, ‘what in the world was I wearing?’ (Laughs)
It wasn’t until college or maybe even shortly thereafter that I realized my true worth and where my attractiveness stemmed from. I realized that even if you’re physically attractive, you still have to exude confidence as well. As I’ve matured, I’ve grown to appreciate people who like me for my intellect because it lets me know that they appreciate me, for me.

“…Having a team, a true support system, is imperative to your growth in this industry…”

ZD: How did you learn to disregard people’s comments about your complexion? Who were positive role models for you that helped to build your self-esteem?
EA: It’s weird saying this, but one of my biggest role models when it comes to my complexion and being comfortable in my skin is my twin brother. I’ll never forget growing up in Philly, our mom made us have “Circle Time” where we would talk about our feelings. One day during “Circle Time” my brother was crying because the kids at school were making fun of how black he was. My mom and pop taught my brother that the kids making fun of him were also black–his skin was just more “rich”. My dad helped him learn how to make jokes back. Years later that same dark skin boy that everyone made fun of was our high school Homecoming King.

As we got older he created this ‘I don’t care’ attitude because regardless of how dark he was, he still excelled at everything you would want to be great in. I didn’t realize I always admired that about him and that’s partly why I cared so much about what others thought of me because I was a little older when I had my first altercation over race.

In sixth grade a white boy called me a “nigger” with that harsh and sharp emphasis on the “er”. When I stood up, he towered over me as well as every other student in class. In biblical terms, I was David and he was Goliath. Needless to say, even though the odds were against me, I won the fight fair and square. I think that’s when I realized that my skin complexion comes with a set of super powers (laughs). Even though I got suspended from school, my dad didn’t punish me because he was more so glad that I defended myself. My grandfather even started calling me, “Muhammad Ali”. I wasn’t proud of having to fight but that situation help me to become fearless because I knew that I could tap into an inner strength that others wished they possessed but historically African Americans have gone through so much, it’s just something that we have naturally.

“…Never be apologetic for having superior genetics…”

ZD: Oftentimes when people label someone else’s life #goals (whether it’s their body, relationship or their lifestyle) that doesn’t take into consideration that person’s struggles or sacrifices before posting their perfect photo. With your previous experience as a model, a trainer and now an actor in Hollywood, is it fair for people to assume that you don’t have doubts or insecurities about yourself?
EA: That philosophy in itself is hilarious to me! That only gives you the opportunity to have more doubt. Think of it like this, the progression of my career is literally centered around someone else’s opinion of me. If they don’t like me, then I don’t get the job. I have to face that criticism every day, and you never get “use to it” because it’s a new person with a different perspective of my look every time. You just have to learn how to better deal with it. That’s why having a team, a true support system, is imperative to your growth in this industry. So that they can help remind you on the days that you’re down, who you really are. I’m confident in who I am and the skin I’m in but I’m also human and sometimes it’s hard to push past the ‘no’s’. Because the voices that have hand in my career seem to be the loudest. However, I never let a rejection overpower my inner voice and my belief in myself. 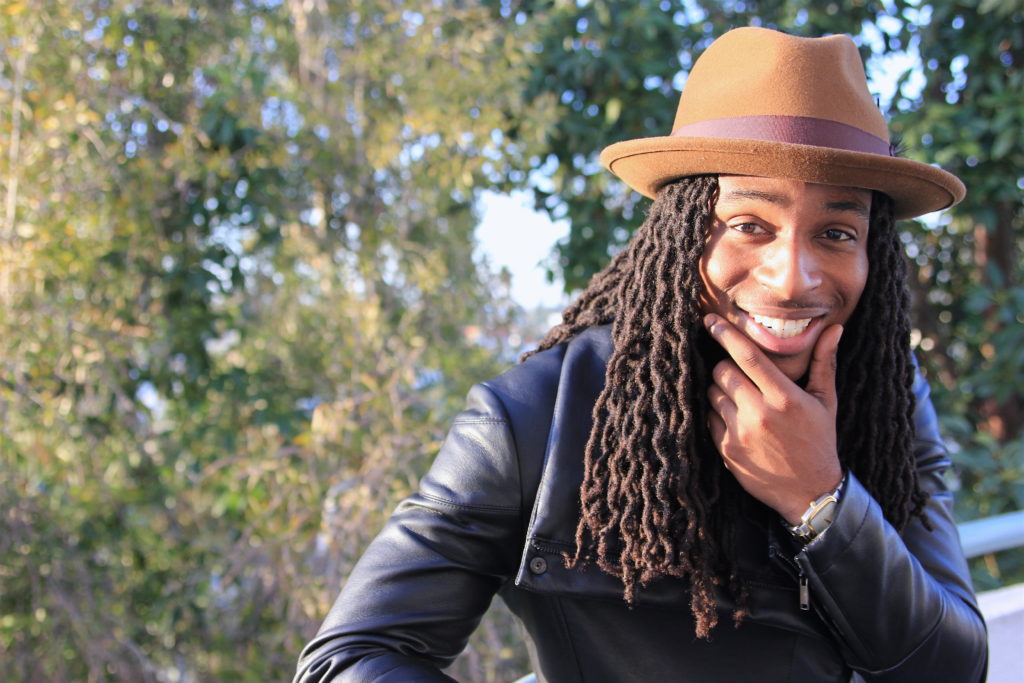 ZD: ​What advice would you give to other young men who may be being teased about their complexion? How can they push past the criticisms and develop confidence?
EA: There’s a Drake lyric that I really admire… (*Editor’s note: The irony…)
In his song, “Lord Knows” he said, “…A lot of niggas came up off a style that I made up but if all I hear is me then who should I be afraid of?” The same concept applies to our complexion, our style, our music and our culture;

Be proud that everyone who sees you that isn’t like you wants to imitate what you are. Even if it comes off as hate, understand that hate is also a form of admiration. Never be apologetic for having superior genetics.There are people that pay for tans to get an ounce of your melanin. Your complexion is what makes you stronger than you can even imagine. There’s no one else like you so own it.

rejection overpower my inner voice and my belief in myself…”

ZD: When my hair fell out, I learn to wrap my baldie with a headscarf and eventually I started wearing hats which have become a signature part of my style. Was there something that you previously viewed as ‘flaw’ that you’ve learned to embrace and work to your advantage?
EA: Now when I say this, don’t everyone look at once…One of the things I used to feel really uncomfortable about is my nose! It’s huge right? I’ve been called “Toucan Sam” from the Fruit Loops box and someone even tried to nickname me “Beak” in middle school. The shape and size of my nose comes from my mother’s side of the family for sure! I started to get more comfortable when I was able to make jokes about it myself. So before people could do it, I would beat them to it. It also helped that I got really good at cracking jokes on other people so I would notice a lot of their insecurities. That helped me to say, ‘you know what, my nose ain’t that bad.’

Later on I came to my biggest realization, that if the most beautiful woman I know shares this same nose that I do, who am I to deem it unattractive? My mother, even at age 58, is still a fox to me and she has the same oversized hook nose that I have. So I guess that makes us two beautiful human beings. I’ve begun to appreciate features I didn’t notice before which in turn gave me a confidence that others are able to appreciate as well.

A few months ago I launched a passion project, ZonDAmour.com as a space to empower dark skin men & women. At the time, I wondered if men would be open to sharing their own insecurities since society is preoccupied with “fixing” women’s “flaws”. Our bodies are always being criticized. Oftentimes women put their self-worth in the hands of men for validation not realizing that they’re also figuring themselves out. So conversations with @egyptali_ were a breath of fresh air. Despite hundreds of “likes” on every photo of his body and babyface, his vulnerability is a part of what makes him attractive. Here are some clips from a candid conversation we had about dating for dark skin women and the responsibilities we have as creatives who direct and produce to show more images of dark skin men & women in the media. #Cinematographer: @thebowenimage #NewMusic “Flyin Kites” by @LavellStreets . .. …. ….. …… ……. …….. ……… #Producer #Host #Filmmaker #LincolnUniversity #HBCU #APhiA #UnapologeticallyBlack #BlackHistory #ForTheCulture #BlackIsBeautiful #ABFF #DarkSkinWomen #Haitian #HowardUniversity #HBCU #DST #DeltaSigmaTheta #ΔΣθ #DST #AlphaPhiAlpha #NaturalHair #Locs #BlackGirlMagic #Revolt @TVOne @OWNTV @Revolt @becauseofthem @Blavity @darkskinwomen #Director #EntertainmentJournalist #GreekUnity #Creatives